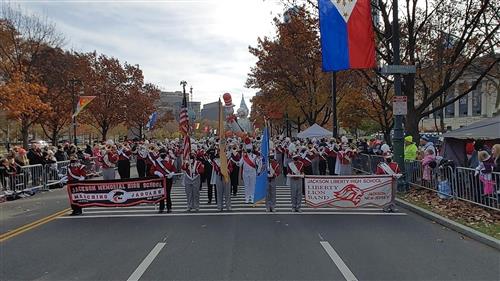 LINK TO VIDEO BELOW:

On November 25th, members of the Jackson Liberty and Jackson Memorial High School Marching Bands came together as one for the “6 ABC Dunkin’ Thanksgiving Day Parade” in Philadelphia, Pennsylvania. This parade is the oldest Thanksgiving Parade, celebrating its 100th running in 2019.

The band members marched along Benjamin Franklin Parkway to the Philadelphia Art Museum playing songs such as “Happy” and “Shut Up and Dance.”

The students enjoyed being a part of this exciting live event which included floats, balloons and, of course, Santa.

“I loved bringing the two programs together for this parade. That day we were one town with one sound," said Scott Katona, Jackson Liberty’s Band director.  "I'm also very proud of all the students on how well they represented the music program, their schools and town that day. Bravo!”

Jason Diaz, Jackson Memorial’s Band director added: “What a pleasure it was to work with the staff and students of the Liberty Lion Band! I loved watching students from both schools interact with each other, both in conversation and in song. Before the official start of the parade, there were a few student musicians who started riffing off each other, and performing an instantaneous song! What an awesome experience for all involved!”

The Jackson School district is incredibly proud of these bands, our music program and the students and staff.

"These musicians and performers and the staff who lead them represent our district with such talent and grace,'' said Superintendent of Schools Nicole Pormilli. "This united effort showcases the true spirit of this holiday and the spirit of togetherness we try to instill throughout our district. I am so proud of these students and thankful our staff and our band parent volunteers who help make events like this a reality.''